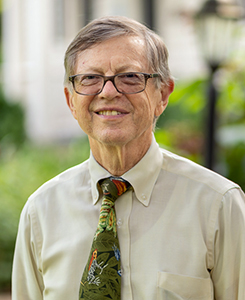 James S. Warren earned his Bachelor of Arts and Juris Doctorate degrees from Wake Forest University. In 1974, he joined John Rich to form Rich and Warren, the original firm, now known as Warren, Shackleford & Thomas. Admitted to practice law in all state and federal courts of North Carolina, James restricts his practice now to real estate transactions. With over 40 years of experience, James handles everything from the first-time home purchase to complicated commercial purchases. He assists developers seeking to start a subdivision and the home buyers who move into that subdivision.

James is a Wake Forest native. He and his wife Carol have three children, Amy, Tom and Anthony. He proudly served our country in the United States Army. James is a member of the North Carolina State Bar, the North Carolina Bar Association and the Wake County Bar. Locally, he has served on almost every community or civic organization board more than once, and in 2006, he was chosen as Wake Forest’s Citizen of the Year.